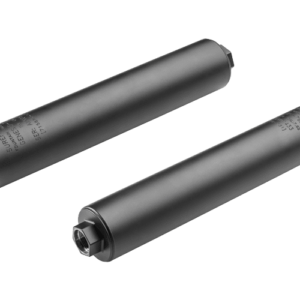 The best-in-class Genesis 762 thread-on suppressor—member of the SureFire Genesis Series—boasts the ultimate sound attenuation of any suppressor ever built for 300 Black Out (subsonic or supersonic), .308, and 300 Win Mag. This versatile suppressor is also very effective in suppressing the 5.56 mm round. This unprecedented performance is due to a proprietary stainless steel baffle system that only SureFire—winner of USSOCOM’s most rigorous suppressor trials ever—could design and build.

Designed primarily for hunting, recreational shooting, and tactical applications (such as use with a precision sniper rifle or a PDW, personal defense weapon), the GENESIS 762 is compact and lightweight, but also very rugged since it’s built to SureFire’s exacting standards—just like our SOCOM and SF Ryder Series suppressors. It’s constructed of US-mill certified stainless steel and it also features a high-temp alloy Inconel blast baffle, which greatly enhances overall durability. And every Genesis model is coated with a rugged Cerakote™ finish, in either Black or Dark Earth, to optimize durability and appearance. All these features make the Genesis 762 rugged enough for full-time use.

Like all extraordinary SureFire suppressors, the Genesis 762 produces minimal and consistent point-of-impact shift compared with an unsuppressed weapon. The single-point-cut threads, along with the ingenious hex-head design on the front and back plates, ensure that the suppressor attaches simply and securely, aligns perfectly, and performs exceptionally without coming loose. The hex head on the front plate even permits the properly torqued installation of the Genesis 762 under already installed handguard. Available with 9/16 x 24 or 5/8 x 24 single-point-cut threads, the GENESIS 762 securely screws on to a wide range weapons and its computer-controlled welding further increases its overall strength.

The Genesis 762 is the beginning of a whole new breed of suppressor, providing maximum sound attenuation, outstanding versatility, and an affordable thread-on suppressor for recreational and tactical use. There’s nothing else like it.

NOTE: If you need a suppressor for full-auto use, to suppress first-round flash, and/or to lower back pressure and cyclic rate, please see our combat-proven SureFire SOCOM suppressors—winners of the most extensive and rigorous suppressor trials in U.S. history.